Quick guide to the University of L'Aquila 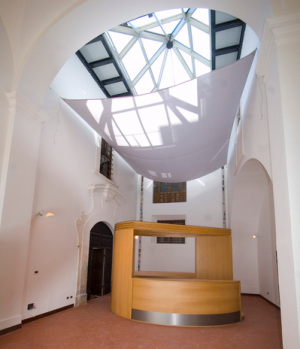 The “Luigi Zordan” Congress Centre is located within the St. Basilio Monastery, in the historical centre of our city. Many of the conferences, exhibitions, concerts and other prestigious events organized by our university are held there and, upon request, the structure hosts other affairs planned by private and public organizations as well. The Centre is equipped with sophisticated technological equipment allowing for a variety of multisystem video and audio recording and video conferencing.

On the ground floor an area is reserved for a permanent graphics exhibition dedicated to the artist Nicola D’Arcangelo (Atri 1893 – Pescara 1975).

According to historical tradition The St. Basilio Monastery was founded in the year 496 by St. Equizio; certain documents lead to believe it was established in the year 1000. The church was consecrated in 1112 by Bishop Dodone and the monastery reached its splendour when it was home to the Benedictine Celestine nuns. When it was suppressed in the 1866 the nuns still remained to run an all-girl college but it was later taken by the military, and only in 1932 was a portion of the ancient monastery, together with church, given back to the nuns. The section dating back to the 18th Century was used as a school until a few years ago.

In 1993 the University stipulated an agreement with the City Council of L’Aquila and in the years 2005 and 2006 the late Prof. Luigi Zordan, then director of the Department of Architecture and Urban Planning at the University of L’Aquila, together with his collaborators, elaborated a project to transform the historical building into a congress centre which took two years to carry out. The Congress Centre is dedicated to the memory of Prof. Zordan.

The Congress Centre has been temporarily closed to the public due to damages caused by the earthquake of 6th April 2009.